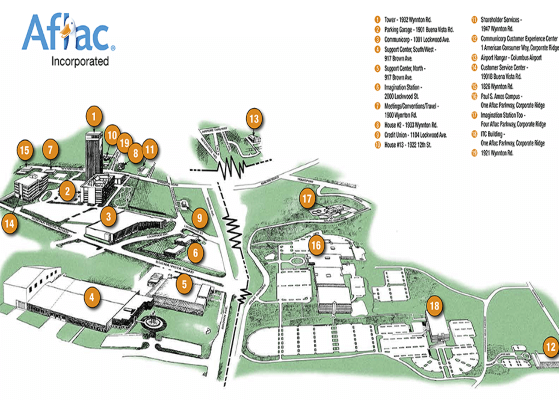 Aflac was burdened by a commercial HVAC system that was generating excessive energy costs, nuisance alarms, and hot and cold calls for five buildings across its corporate campus.

Our solutions helped Aflac reduce energy consumption by 21 percent across five buildings and by 14 percent if the calculation includes a building that has a 24/7 printing facility and a data center. In one building, the savings exceeded 40 percent.

Also, their facilities maintenance staff now uses the facilities management system as a strategic asset rather than simply for HVAC control. Technicians can use history logging and other functions we programmed to diagnose issues quickly, freeing up valuable time for preventive maintenance.

The result is a tightly-integrated, precisely-controlled HVAC system that is far easier to keep running at peak performance and maximum energy efficiency, while helping ensure the comfort of employees and the productivity of Aflac’s operations.

We custom-programmed the new building controls to start the system in response to outside and inside temperatures, and at fixed times. Their air handling unit deck temperature is reset primarily according to interior conditions.

We also evaluated mechanical and lighting systems across the campus to identify further energy-saving solutions. Because Aflac’s training rooms were continually conditioned although intermittently occupied, we installed occupancy sensors to activate HVAC and lighting. We also provided Aflac’s facility managers with a user-friendly interface to easily change HVAC system schedules, and synchronize them with class times and durations.

We also modified an air conditioning system originally designed to cool a call center. When the center was converted to general office use, the load plummeted, causing the dehumidification system to run year-round constantly. So, we installed variable frequency drives (VFDs) to slow the system’s fans, allowing the dehumidification cycle to be disabled, which dropped fan energy consumption by more than 50 percent.

Aflac had also been overwhelmed by frequent and unnecessary alarms, so their building maintenance team had turned off the alarm function. We discovered that an alarm for improper chilled water temperatures often went off in tandem with numerous other alarms as space temperatures throughout the building went out of spec. To solve this, we programmed the building automation system to respond to the core issue (improper chilled water temperatures) while suppressing space temperature alarms.

We also recommissioned the entire mechanical system. During this process, we identified numerous opportunities for performance improvements and energy-use optimization, and presented them to the owner with a savings analysis.

Aflac is a leading provider of supplementary insurance for more than 40 million customers worldwide.